By the Gulden Advisory Board:

The past few months have been a real rollercoaster for Gulden, the community, the GAB and the developers. It started in March with completing the GAB to 9 people, after the elections Onno, Jaap and Robby joined the GAB. These new members were called into action because in the first GAB meeting in April big decisions had to be made. What are we going to develop in the short and medium to long term. The atmosphere in the community was positive and the course slowly but steadily crawled back up. Even before this “roadmap” could be worked out and shared with the community, we -as a community- were confronted with the announcement from Nocks that they would stop, and this on a very short term.

In our opinion, the unrest that this caused was dealt with by the GAB and the Gulden team heads-on. On the day of the announcement we convened a GAB meeting as a matter of urgency, and priority was given to developing a DEX and finding new partners to list to Gulden and function as a counter for the DEX.

But this is exactly where the shoe pinches. Because all these developments (both those already planned and those required on an ad hoc basis) cost money. And since the Nocks case, the Gulden price has been under further pressure. The current 40G for development does not cover the costs of development at the current rate. In addition, you could also call it development, parties who want to list NLG or who want to offer certain functionalities previously offered by Nocks ask for money for this. This is partly because they all have to bear the costs of the new DNB legislation.

That is why we have decided to increase the Block subsidy from 120 to 160 in the next update (hardfork). The rewards for Mining and Witness remain the same. The reward for development (in the broadest sense of the word) goes to 80G.

We did not take this decision overnight and weighed all other options. It simply comes down to the fact that if we don’t make this decision, the project will come to a standstill because further development will then no longer be affordable. And we cannot and do not want to run that risk, with all the great plans for the future that we have been able to present in recent months in mind.

Now that crypto is reviving, we want to be in a good position when there is more interest in Gulden again. It is important that we can develop easy buying opportunities.

At the GAB online meeting last Monday 27-7-2020 the GAB unanimously voted for this change, with 9 votes for and 0 votes against.

At the current rate (31-7-2020), development will be covered and should the rate rise in the coming period, the surplus will, in consultation with the GAB, be used for costs such as listings, exchange and checkout-related collaborations with third parties and marketing.

In addition, following a request from the community, we have asked Centure to remove the additional 10% for development at Blockhut.com, so that the direct purchase of Development Gulden will be at the same rate as on Bittrex. This change has been made by them per direct. 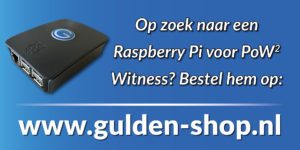